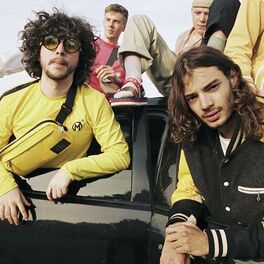 Columbine are a hip-hop collective formed in 2014 in Rennes, France, by rappers Foda C and Lujipeka. The other members of the group are Lorenzo, Sully, Chaman, Yro, Chaps, Sacha and KCIV. They produce their own recordings, which have included an EP titled '2k16' (2014) and their debut album 'Clubbing for Columbine' (2016), inspired by the 2002 Michael Moore documentary 'Bowling for Columbine' about the infamous school shooting in America.

The album 'Enfants Terribles' came out in 2017 followed by 'Adieu Bientôt' (2018) and 'Adieu, Au Revoir' (2019) with the track 'C-est Pas Grave'. Their 2019 schedule was to include appearances at venues in cities and towns across France including Nantes, Laval, Reims, Marseille and La Rochelle plus Liege, Belgium, and Montreux, Switzerland.