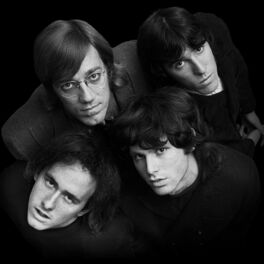 Live at the Isle of Wight Festival 1970

Behind Closed Doors - The Rarities

The Very Best of the Doors

No One Here Gets Out Alive

Rock On the Funky Side

Summer In the Garden

One of the most iconic bands to rise from the Sixties California counter-culture, Jim Morrison's poetic lyrics and magnetic charisma gave a dark under-current to The Doors' psychedelic pop rock. Named after the Aldous Huxley novel "The Doors of Perception", they earned their spurs as a house band at the notorious Whisky A Go Go club on Sunset Strip in Los Angeles before signing with Elektra Records and releasing the classic debut album "The Doors" (1967). "Light My Fire" gave the band a huge US Number 1 single but in a haze of drugs, sexuality and Eastern mysticism it was Morrison's wild antics that hit the headlines as he was accused of trying to start a riot, exposing himself and was arrested onstage for public indecency. After six studio albums and international acclaim, Morrison died of a drug overdose in Paris in 1971, aged only 27. The band continued with two post-Morrison albums but eventually split in 1973. Artist biography compiled by BDS/West 10. All rights reserved