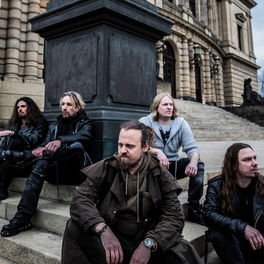 The Days of Grays

For the Sake of Revenge

Sonata Arctica are a metal band from Finland with the current line-up of singer Tony Kakko, guitarist Elias Viljanen, keyboard player Henrik Klingenberg, bassist Pasi Kaupinnen and Tommy Portimo on drums. Portimo was one of the original members along with guitarists Marko Paasikoski and Jani Liimatainen who started out as the Tricky Beans playing hard rock but moved to metal with the arrival in 1995 of singer Kakko and in 1996 by bass player Pentti Peura. They went by the name Tricky Beans until 1997 and went through some more line-up changes. They made their recording debut with 'Eclipica' in 1999 and released several others including 'Successor' (2000), 'Silence' (2001), 'Takatalvi' (2004) and 'Last Drop Falls' (2006). Their 2007 release, 'Unia', reached number 37 on Billboard's Heatseekers Albums Chart, 'Days of Grays' (2009) went to number 19, 'Stones Grow Her Name' (2012) peaked at number nine and number 19 on the Hard Rock Chart, 'Pariah's Child' (2014) reached number six on Heatseekers and number 22 on the Hard Rock Chart and 'The Ninth Hour' (2016) reached number seven on Heatseekers and number 12 on the Hard Rock Chart. Their 2018 schedule included performances at venues across Finland and also in Spain, Romania, Russia and Belarus.