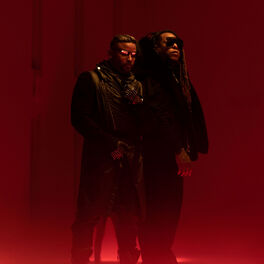 Pioneers in their concept, Félix Ortiz (Zion) and Gabriel Pizarro (Lennox) brought their talents together to establish what is today’s most important duo in the urban genre. Their strong social media presence shows just how many millions of fans they have around the world. With a career that has spanned over 16 years, Zion y Lennox have played a pivotal role in the evolution of reggaetón and are seen as founders of the genre. In the early stages of their careers, hits like “Tensión,” “Doncella” and “”Yo Voy” feat. Daddy Yankee established an urban movement in the streets of Puerto Rico and Latin America, as did artists like Vico C, Hector El Father and Daddy Yankee. Over the last year, their hits, like “Pierdo La Cabeza”, “Ganas De Ti” and “Embriágame,” have had worldwide success, generating millions of impressions online and hitting the airwaves. In the 16 years of their trajectory, Zion y Lennox have had over 50 smash hits in the urban genre. They’ve held countless amounts of concerts worldwide and have collaborated with artists including Ricky Martin, Daddy Yankee, Fatman Scoop, and many more. They’ve launched four successful albums: “Motivando La Yal” (2004), “Motivando La Yal Special Edition” (2005), “Los Verdaderos” (2010), and “Motivan2” (2016). They were given the prestigious Billboard award for “Urban Duo or Group of the Year.” 2016 proved to be an eminent year for Zion y Lennox. The duo was nominated at Premios Lo Nuestro, where they performed their hits “Embriágame” y “Pierdo La Cabeza,” as well as at the Latin Billboard awards, where they not only performed twice but also took home the award for “Urban Duo of the Year.” They also received nominations at Premios HTV, Heat Latin Music Awards, Premios Tu Mundo, and the Latin American Music Awards, where they also won “Urban Duo of the Year.”