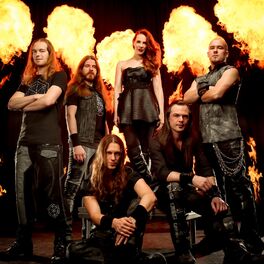 Epica vs. Attack on Titan Songs

Beyond the Matrix - The Battle

This Is the Time

As part of 1990s Dutch rockers After Forever, Mark Jansen helped mix scorching guitar licks and deathly vocal growls with soaring operatic opulence and dramatic prog-rock fantasies. The band became leading exponents of symphonic metal, but Jansen wanted to further explore the idea of melding classical music with heavy rock and left in 2002 to form Epica. He recruited his then girlfriend Simone Simons as the band's front woman and their debut album 'The Phantom Agony' used a choir and a string section to create a huge, bombastic, orchestral sound.

With Simons' soul-soaring vocals propelling the emotional swell and the band's grizzly underbelly led by Jansen's grunts and croaks, their albums 'The Divine Conspiracy', 'Design Your Universe' and 'Requiem for the Indifferent' addressed profound themes such as the battle between science and religion, the power of imagination, spirituality and political conflicts. More than a decade of touring helped establish their reputation around the world, and in 2016 they released their seventh studio album 'The Holographic Principle' which reached number four in Holland and cracked the top 50 of the UK Albums Chart for the first time. In 2017 EP 'The Solace System' was released featuring nine tracks originally earmarked for 'The Holographic Principle', and they followed this in 2018 with an appearance on German band Powerwolf's studio album 'Sacrament of Sin'.