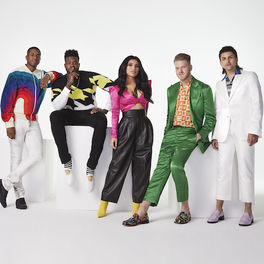 The Lucky Ones (Deluxe)

We Need A Little Christmas

That's Christmas To Me (Deluxe Edition)

The Wizard of Ahhhs

Pentatonix is a group of American a cappella singers who won the first prize of $200,000 and a recording contract on the NBC-TV talent show 'The Sing-Off' in 2011. They went on to record hit albums and establish a tremendously popular YouTube channel. They began in Texas with baritone Scott Hoying, tenor Mitch Grassi, mezzo-soprano Kirstin Maldonado, bass Avi Kaplan and Kevin Olusola on vocal percussion and beatboxing. Kaplan left in 2017 to be succeeded by Matt Sallee. With a melodic vocal mix that includes pop, dubstep and hip-hop, they won the talent show with a performance of the Survivors track 'Eye of the Tiger'. Hoying, Grassi and Maldonado grew up in Arlington, Texas, where they sang together in high school. A version of Lady Gaga's 'Telephone' won attention on YouTube and after attending university they joined with Kaplan and Olusola to audition for 'The Sing-Off'. The group's name, taken from the pentatonic vocal scale, is often shortened to PTX on their EP releases: 'PTX: Vol. 1' (2011), 'PTX: Vol. II' (2012), 'PTX: Vol. III', which went to number five on the Billboard 200 in 2014, and 'PTX: Vol. IV', which reached number four. The album 'That's Christmas to Me' hit number two on the Billboard 200 in 2014, 'Pentatonix' went to number one in 2015 and so did 'A Pentatonix Christmas' in 2017. They had a single, 'Dog Days Are Over' on the Billboard Hot 100 at number 22 in 2011 and six songs made the Adult Contemporary Chart: 'Little Drummer Boy' (2014) at number 27, 'Mary, Did You Know?' (2015) at number 20, 'That's Christmas to Me' (2015) at number three, 'Joy to the World' (2016) at number nine, 'Can't Sleep Love' (2016) at number 19 and 'Hallelujah' (2016) at number four. Their version of 'Jolene' featuring Dolly Parton peaked at number 18 on the Hot Country Songs Chart and won the Grammy Award for Best Country Performance By a Duo Or Group in 2016. In 2017, the group toured Japan and with a deluxe edition of 'A Pentatonix Christmas' featuring new songs released, they announced an American Christmas tour. 'A Very Pentatonix Christmas Special' aired on NBC-TV in November 2017. Artist biography compiled by BDS/West 10. All rights reserved