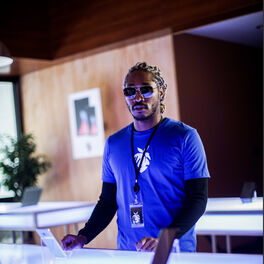 Future is an American singer-songwriter and rap star from Atlanta, Georgia, known for his melodic approach to the genre. He has had a long list of hit singles and several hit albums since he burst onto the scene with a series of mix-tapes in 2010 following a stint with The Dungeon Family. He has had 107 releases on Billboard's Hot R&B/Hip-Hop Songs Chart including 14 in the top ten and 68 songs on the Hot 100 with eight in the top ten. He has also had eight albums on the Billboard 200 including five that went to number one and nine on the R&B/Hip-Hop Albums Chart with seven that reached the top. He performed on a 2016 Drake album that earned Grammy Award nominations as Album of the Year and Best Rap Album and has collaborated with hip-hop artists including Lil Wayne, Ace Hood, Rich Gang, Rocko and Ciara. He featured with Ed Sheeran on Taylor Swift's 2018 single 'End Game', which peaked at number 18 on the Hot 100.