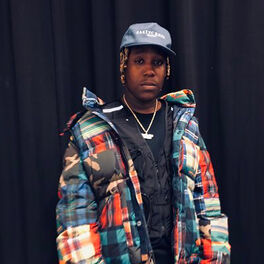 Back Up (feat. Wiz Khalifa)

Music To Be Murdered By

Don Toliver is a singer, rapper and songwriter hailing from America's South whose career got a serious boost when he featured on labelmate Travis Scott's track 'Can't Say'.

Born Caleb Zackery Toliver in Houston, Texas in 1994, Don Toliver grew up in the Southwest Alief area of Houston, Texas. He began putting out music in 2017, releasing a joint mixtape with fellow rapper Yungjosh93 titled 'Playa Familia'. Later that year Toliver released the solo singles 'Diva' and 'I Gotta' and in March 2018 was scooped up by Atlantic Records and We Run It Entertainment. That summer saw Toliver release his first major label mixtape, naming it after his alter ego Donny Womack. A day later Travis Scott released his album 'Astroworld' featuring Toliver as an uncredited vocalist on the track 'Can't Say'. The song, while never officially released as a single, was a breakout hit and earned itself a video sponsored by Saint Laurent. In August it was announced that Toliver had signed to Scott's Cactus Jack imprint and Toliver was soon touring with Scott.

Toliver returned in 2019 with the singles 'Back Up' (featuring Wiz Khalifa), 'Best You Had' and 'No Idea'.