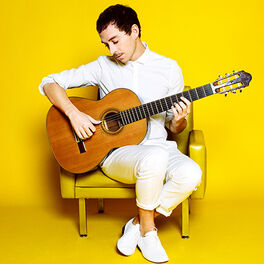 Thibault Cauvin is one of the most talented, charismatic and sought-after guitarists in the world today. He is traveling the globe throughout the year at the invitation of the most prestigious festivals and concert halls. Between New York and Hong Kong, San Paolo and Istanbul, London and Melbourne or Singapore and Tel-Aviv, he shares his music with us. He has already given more than 1000 concerts worldwide, warmly greeted by the critics. He has also participated in many TV and radio programs and collaborated with famous musicians, composers and symphony orchestras. Considered as an innovative and creative performer, Thibault is regularly the guest of honor at festivals, universities and conservatories throughout the world to give master-classes, lectures or to judge competitions. From a family of musicians, Thibault began learning the guitar with his father at the age of 6. After graduating from the Bordeaux and Paris conservatories, Thibault embarked on the international competitions circuit. At the age of 20, he was the frst and only guitarist worldwide to win 13 international first prizes. Thibault was named "Ambassador of Greater Bordeaux". Thus, he was awarded by the urban community of Bordeaux the prestigious task of representing his hometown throughout the world. This biography was provided by the artist or their representative.