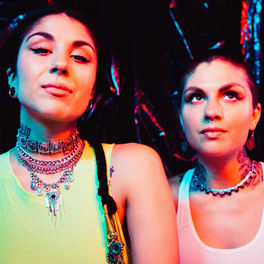 Live for the Night (Remix EP)

United Kids of the World (Remixes)

Combining glorious, euphoric hooks with house bangers and positive, passionate songwriting, siblings Jahan and Yasmine Yousaf turned EDM outfit Krewella into one of the most exciting electro-pop forces of the 21st century.

Landing a deal with Columbia Records, their debut album went on to reach number eight in the US charts in 2013, but soon after Trindl acrimoniously left the band and attempted to take legal action, though the case was eventually settled out of court. The sisters continued on with EPs 'Ammunition' and 'New World Part 1' and built a worldwide social media following before returning in 2018 with singles 'Alibi' and 'Runaway'.