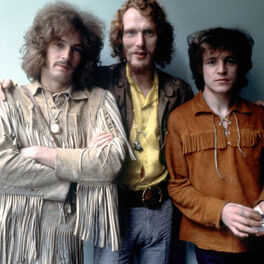 The Very Best Of Cream

Sunshine Of Your Love (Live At Oakland Coliseum Arena, California / 1968)

Sunshine Of Your Love - A Life In Music

The Sopranos - Music from The HBO Original Series

Eric Clapton, Jack Bruce and Ginger Baker were all acclaimed musicians after respective stints with The Yardbirds, John Mayall's Bluesbreakers, Graham Bond Organisation and Powerhouse, when they decided to pit their talents together. The result was Cream, one of the most influential bands of all time which fused hardcore jazz, blues and rock around Clapton's guitar, Bruce's technical bass and Baker's jazz drumming.

They released debut album 'Fresh Cream' in 1966, comprised mainly of blues covers, though it also included their first hit single 'I Feel Free', written by Bruce. Their second album 'Disraeli Gears' was released in 1967, a blend of psychedelia and blues which inspired many subsequent bands and reached the top five of both the US and UK Albums Chart, including further hits 'Strange Brew' and 'Sunshine of Your Love'.

Their third album 'Wheels of Fire' (1968) topped the US Albums Chart, but the band's combustible relationship had already exploded and they split after a farewell tour in 1968, making just one more album: 'Goodbye' (1969). The group reunited for their Rock and Roll Hall of Fame induction in 1993 and performed four shows at London's Royal Albert Hall in 2005, which extended into a US tour. However, old issues soon resurfaced and they split shortly after. Jack Bruce died on 25th October 2015 aged 71 and Ginger Baker died 6th October 2019 aged 80.