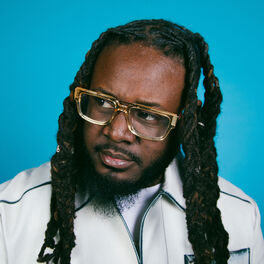 Everything Must Go, Vol. 2

Everything Must Go, Vol. 1

One of the few Muslim rappers, T-Pain (real name Faheem Najm) started out with Florida rap collective Nappy Headz before Akon discovered T-Pain's cover of his hit single Locked Up and signed him to his label Konvict Muzik. He became renowned for pioneering the use of the auto-tune effect, turning his voice into a robotic, digital sound and scoring the hits I'm Sprung and I'm In Luv (Wit A Stripper), and the technique would sweep the world of hip hop with Kanye West, Snoop Dogg and Lil Wayne all using it. Single Buy U A Drank (Shawty Snappin) and second album Epiphany (2007) both shot to Number 1 in the US and T-Pain teamed up with Akon on the Top Five hit Bartender, before he went on to work on tracks for a whole host of artists - including Lil Kim, Flo Rida and Chris Brown. Lil Wayne appeared on the lead single Can't Believe It from third album Three Ringz (2008) and T-Pain teamed up with Lily Allen and Wiz Khalifa for his biggest UK hit 5 O'Clock, before winning a Grammy Award for Blame It, his collaboration with Jamie Foxx.