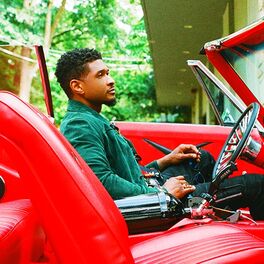 DJ Got Us Fallin' In Love - Remixes EP

Love In This Club

Rhythm City Volume One: Caught Up

Learning to sing in his local church's gospel choir, 14-year-old Usher was spotted at a talent contest and signed to LA Reid's label LaFace Records. As a smooth singing teen starlet he released his first singles while still at school, before making a huge splash with second album My Way (1997). You Make Me Wanna hit Number 2 in the US singles chart (Number 1 in the UK), while Nice And Slow went one step further topping the US charts and establishing a new R&B superstar. Huge, multi-platinum albums 8701 (2001), Confessions (2004), Here I Stand (2008) and Number 1 singles U Remind Me, Yeah, Burn and Love In This Club were followed by a flood of awards as Usher matured from a slick, pop playboy into a confessional soul star. Along the way he's also found time to act in numerous Hollywood films, buy a stake in NBA basketball team Cleveland Cavaliers and sing at Michael Jackson's funeral.