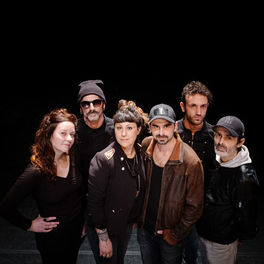 Barcelona, 2008. The French, Spanish and Austrian musicians of the band met by chance in the cosmopolitan and effervescent crucible of the Catalan capital, and so was created La Cafetera Roja. La Cafetera Roja define themselves as a pop/rock/hip-hop band. Alternating between spleen and elation, the female voice adds sensitivity and delicateness to the energy brought by the hip hop flow of the MC. « We like to mix styles cunningly, to create a rich, electric music making you dance and cry at the same time. La Cafetera can also be enraged, sometimes reserved and delicate, but always intense ». As a genuine live band, La Cafetera Roja expresses all of its colours on stage , its interbreeding, its opening. Dynamic, catchy and generous, each gig is a travel with meetings between cultures and sounds. On stage, just like in Barcelona streets, the musicians involve and surprise their audience. Emotions mix up against a backdrop of rock / hip hop universes. This resonance can particularly be heard in « One Shot », the latest and powerful album made by the band. If the pop and danceable harmonies of « Burn » foretell a light and rousing album, the progressive rock of « Art For Peace » proves to be more biting and dissenting. From the trip-hop colours of the smooth and sweet « Woman » to the unclassifiable « Sonnenbrand », this new album confirms one thing : La Cafetera Roja make light of contrasts and styles, with a smile on their faces. « This brand new album is more faithful to our current live set. One thing is certain : it will make people headbang ! » Members: Aurélia CAMPIONE (Lead) Anton DIRNBERGER (MC/ Keyboard) Chloé LEGRAND (Guitar/Chorus) Fiti RODRIGUEZ (Bass/ Chorus) Jean Michel MOTA (Chelo) Pierre Jean SAVIN (Drums)