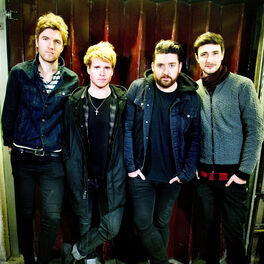 One Day at a Time

One Day at a Time (Deluxe)

Coming Up for Air (Expanded Edition)

Live at The Button Factory - EP

In A Perfect World (Collection)

In A Perfect World (Expanded Edition)

Coming Up For Air (Live and Remixed)

This Must Be Christmas (Single Mix)

The Fault In Our Stars: Music From The Motion Picture

For Kodaline, music isn’t just music. “It’s therapy,” says singer Steve Garrigan. “Break-ups make it really easy to write”, laughs blonde-haired Steve. “When we write music, the first thing we think of is, it’s therapy for us. Then we think of how we can use that feeling to touch as many people as possible.” Teaching each other the principles of songcraft, the music they came up with – some of which can be found on their self titled EP (released in Ireland on Friday 7th September) – isn’t wan or introspective or self-serving. Instead, it’s bold, epic and stirring. Currently maintaining an air of understated mystery (their Facebook bio used to state, merely, “we’re four lads in a band”, Kodaline are soon set to unveil themselves to the world with these first four tracks recorded with Steve Harris (producer for Dave Matthews band, mixer for U2). Steve, Mark and drummer Vinny May – all aged 22 and 23 – have been working towards this moment for much of their young lives. Growing up in houses just two minutes away from each other in Swords, Steve and Mark met aged eight, when they were the only boys in the school choir. “We were there to pick up girls, of course”, jokes Mark. Six years later, at a youth retreat, both were placed in the same house and both took guitars. A musical bond was formed over late night singalongs. Returning to Swords, they recruited Vinny, who also lived two minutes away (“Swords is a small place, for a big town” says Steve), and set about forming the first of myriad bands. The line-up was recently completed by bassist Jason Boland. Having spent two years doing nothing but writing, with just a belief in their talent keeping them afloat, Kodaline is their be-all and end-all. “I dropped out of college and my parents were just freaking out saying, What the fuck are you doing?” says Steve. “There was no deal in place and no money, we just thought, Fuck it, let’s have a crack at it.” The band’s name, incidentally, means absolutely nothing for the moment – they wanted something they could take ownership of. “We made it up ourselves, but we later found out it’s a character on fuckin’ World Of Warcraft,” says Mark. “I promise you, we’ve never even played the game. It’s just a bizarre coincidence.” Mark and Steve clearly have a strong friendship. “We can basically read each other’s mind at this point because we’ve known each other so long,” says Steve. Currently planning another EP, live dates and – further down the line – a debut album, Kodaline are now they’re hoping their music will provide therapy for others too. “Music should have a purpose, you know,” says Steve, “Our purpose is honesty”.