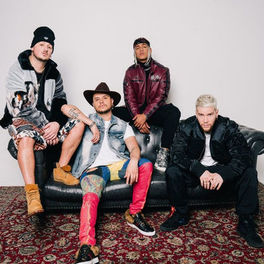 The Colombian group nominated for a Latin Grammy for Best New Artist, is the perfect match of these 4 young music lovers, that have captivated thousands of followers and infecting them with their lyrics and charisma, they are Pablo Mejia (Pablito), Juan David Huertas (El Profe), David Escobar (Dim) and Juan David Castaño (Llané). Soon they reached the first places in radio listings with songs like "Correr el riesgo ", "No te necesito", "Déjame" and "Dame de tu corazón" and many satisfactions and recognitions, among others. The nomination to Mexico Kids Choice Awards 2013 as "Best Musical Artist" nomination for the Latin Grammy Awards in 2012 for "Best New Artist", 5 nominations 2012-2013 Our Land Awards as "Best New Artist", "Best Pop Artist Only or Group "and" Best Pop Performance ", 4 nominations in Shock awards 2011, 2012 and 2013 , nominated for the 40 Principales America 2014 Awards, nominated for an MTV Millennials Awards 2015 nominated for an MTV Europe 2015 Winners Award for "Best New Talent 2010" in the SAYCO 2010 (Society of Authors and Composers of Colombia), Interpreters and image of "fair in my house" official song for the last 5 years of the Flower Fair Medellin Awards . They reached more than 120'000.000 of views with their video of "Suele suceder" the first with NICKY JAM. Piso 21 is the new Proposal of Colombian music for the world, and recently they ratified in the United States with their first official visit promotion, where all media were fascinated with them.