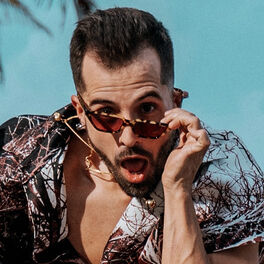 by Mike Bahia, Ovy On The Drums

Mike Bahía first shot to fame on a national Colombian talent show, but, after an early elimination, it has been singles such as 'Buscándote' and 'La Lá' that have cemented his place in the world of Latin pop.

Bahía was born Michael Egred Mejía in Cali, Colombia, in the early summer of 1987. His father's love of music rubbed off on him early and by the age of eight he was already playing the guitar. It wasn't until after he finished college that music would become a serious career proposition for him, however.

After several years studying business management and marketing while fostering his love of music on the side, Bahía emerged on the national stage in 2013. He appeared on 'La Voz Colombia', the Columbian version of 'The Voice'. He left the show during the first eliminatory phase, but that didn't stop him from coming back with his breakout single, 'Buscandote', the following year.

He followed it up with further singles 'Estar contigo' and 'Tarde' as well as collaborations with Gusi ('Tú tienes razón'), Alejandro González ('Le hace falta un beso') and Alkilados ('Magdalena') in 2015.

In 2017, Bahía put out his debut EP, 'Yo Soy', and signed a record deal with Warner Music. His first single with the label, 'Déjame', was released later that year.