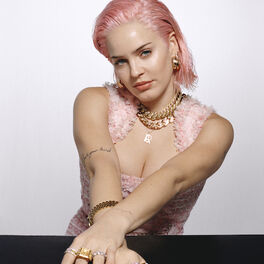 Perfect to Me (Nicolas Haelg Remix)

A former three-time world karate champion, Anne-Marie toured with Ed Sheeran, collaborated with Dizzee Rascal and scored a Christmas number one on her way to becoming one of the UK's brightest R&B/pop starlets.

Growing up in East Tilbury, Essex she was a child actor who took part in the West End musical 'Les Miserables' when she was six, taking up martial arts at the age of nine as a way of burning off some energy, helping her to concentrate and be more disciplined. She went on to become a black belt in Shokotan karate and won World Championship titles in 2002 and 2007, but then began to focus more on music and started entering local talent competitions after leaving college. Spotted and signed to Elton John's management company Rocket Music, she released her first single 'Summer Girl' in 2013 and built up her reputation by featuring on tracks by Gorgon City and Magnetic Man, joining Rudimental on tour and also singing on their album 'We the Generation' in 2015.

Her big breakthrough came the following year when she teamed up with electro-pop group Clean Bandit and Jamaican rapper Sean Paul on the huge hit single 'Rockabye' that notched up over 1.8 billion views on YouTube, topped the UK charts for nine consecutive weeks and became the Christmas number one for 2016. Her solo singles 'Alarm' and 'Ciao Adios' also showed her as a soulful, electro-pop vocalist who crossed the worlds of grime, R&B and pop and she reached number four in the UK charts when she collaborated with DJ Marshmello on the track 'Friends'. She was also part of the Artists for Grenfell fundraising version of 'Bridge of Troubled Water' and again reached the top ten with single '2002' before returning in 2018 with her debut album 'Speak Your Mind' which featured tropical, dancefloor pop anthems and storytelling lyrics that spoke of romantic heartache, everyday anxieties and strong messages of empowerment.