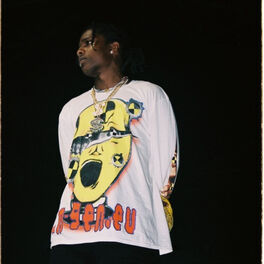 by Tyler, The Creator, A$AP Rocky

Inspired to take up rapping as a 13-year-old after the death of his brother and imprisonment of his father, Harlem born Rakim Mayers (named after the 1980s rap legend) found himself homeless and selling drugs by the age of 15. Joining the A$AP Mob hip hop collective in 2007, he adopted the A$AP Rocky moniker (standing for Always Strive and Prosper) and started making waves when his mix-tape Deep Purple was picked up by New York radio station Hot 97. His track Purple Swag quickly became a YouTube hit and earned the 22-year-old a $3 million deal with RCA, before second compilation Live.Love.A$AP (2011) was praised for its high energy, aggressive rhymes and honest tales about his upbringing. He went on to perform with Rihanna at the MTV Music Awards and recruited Santigold, Drake and Skrillex to appear on his debut album Long.Live.A$AP (2013), which shot to Number 1 in the US charts and confirmed his status as one of the hottest young rap stars in the world.