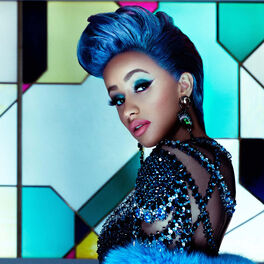 by Cardi B, Bruno Mars

by Cardi B, Bruno Mars

I Like It (feat. Kontra K and AK Ausserkontrolle)

Transforming herself from a stripper working in dingy New York nightclubs into a reality TV and social media celebrity and then a global rap sensation, Cardi B's phenomenal rise to fame was confirmed when she topped the US charts with debut album 'Invasion of Privacy' in 2018 and won her first Grammy Award.

Growing up in The Bronx with her Trinidadian mother and Dominican father, she was born Belcallis Marlenis Almanzar and was always a natural performer who took part in talent shows and attended a performing arts school. She was also involved in the Bloods gang in her teens where she picked up the nickname Bacardi before becoming a stripper when she lost her job as a supermarket cashier at 19-years-old. She credits her time dancing as an empowering experience that helped her earn the money to attend community college and escape a bad relationship, and she soon started making Vine videos and posting raunchy photos to Instagram. Social media restrictions caused her name to change from Bacardi to Cardi B, but her candid personality and her raucous, unfiltered rants earned legions of followers and helped her land a role on VH1's reality show 'Love & Hip Hop: New York' in 2015. Portrayed as a scrappy, wise-cracking, strip-club hustler, audiences loved her stories of plastic surgery and an incarcerated fiancée and she became the massive break-out star of the show when she appeared on Shaggy's dancehall track 'Boom Boom' and released mixtape 'Gangsta Bitch Music, Vol 1.'. Her underground club banger 'Lick' was another landmark moment and she signed a major deal with Atlantic Records before the anthem 'Bodak Yellow' knocked Taylor Swift from the top of the US charts in 2017 and made Cardi B only the second solo female rapper to ever reach number one.

She topped the charts again with strutting Latin rap hit 'I Like It' featuring reggaeton stars Bad Bunny and J Balvin and later married rapper Offset from hip-hop group Migos, but was never too far away from controversy thanks to a high profile, long running feud with Nicki Minaj. There were also hit collaborations with G-Eazy on 'No Limit', Bruno Mars on 'Finesse' and Maroon 5 on 'Girls Like You', before her album 'Invasion of Privacy' was received as a lavish, strutting, party-starting classic, and became the sixth biggest-selling record of the year in the US and won the Grammy Award for Best Rap Album. She turned down the opportunity to perform at the Superbowl half-time show in 2019 because of her support for Colin Kaepernick's protests, before teaming up again with Bruno Mars on the R&B hit 'Please Me'.