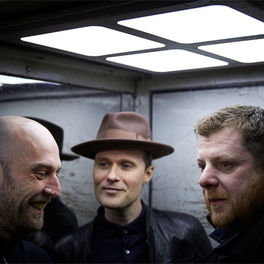 Half Drunk Under a Full Moon

In Your Own Sweet Time

Yes Sir, I Can Boogie

Half Drunk Under a Full Moon

Another Round - Încă un rând!

Dance with the Devils

A brashly melodic indie rock outfit from Glasgow, the Fratellis seemed to emerge fully formed from the Babyshambles-inspired boho-chic scene that also spawned The Rakes and The Paddingtons. Their debut full-length Costello Music (2006) mixed the tried-and-true sounds of glam rock, stripped-down acousticisms, and Class of 1977 punk, featuring a pair of Top Ten hits in the U.K., "Chelsea Dagger" and "Whistle for the Choir." (In time-honored punk fashion, the three band members all used the surname Fratelli.) Subsequent records earned Top Ten placings in the local Scottish charts, including 2008's 'Here We Stand', 2015's 'Eyes Wide, Tongue Tied', and 2018's 'In Your Own Sweet Time'. The Fratellis upcoming new album, 2021's ‘Half Drunk Under a Full Moon’, is out April 9th.