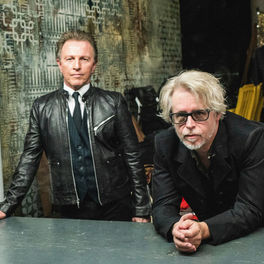 I'll Be There for You (Theme From “Friends”)

How Far Would You Go

I'll Be There for You (Theme from Friends) (Re-Recorded Version)

Friends - I'll Be There For You

I'll Be There For You (Theme From FRIENDS) / Snippets: Don't Hide Your Love / End Of The Beginning / Lovin' Me Insane / Drowning I

Responsible for creating the catchy theme tune to the hugely popular TV sit-com 'Friends', power pop duo The Rembrandts specialised in jangly, melodic, radio-friendly singles, but never came close to repeating the massive success of their signature track 'I'll Be There for You'. Danny Wilde had originally started out in the mid-1970s as front man of retro rock & roll act The Quick and supported burgeoning young bands such as The Ramones, Van Halen and The Runaways, before playing with new wave outfit Great Buildings and releasing solo records in the early 1980s.

Forming The Rembrandts with Minneapolis songwriter Phil Solem in 1989, the pair recorded their self-titled debut album at Wilde's home studio in Los Angeles and found success with the single 'Just the Way It Is, Baby', which reached number 14 in the US Charts. Soon after, their clean, melodic sound caught the attention of television producers David Crane and Marta Kauffman, who recruited them to turn lyrics they'd written into opening music for the new pilot they were working on and, as 'Friends' went to air and quickly became highly popular, so too did their song. 'I'll Be There for You' went on to reach number three in the UK Charts in 1995 and was the most played song on American airwaves for eight weeks, whilst the publicity helped the band's third album 'LP' reach platinum status. With their other material having a less popular sound and more of a rock, singer-songwriter feel, their later work, such as 1998's 'Spin This' and 2001's 'Lost Together' made little impression. They released a 'Greatest Hits' album in 2006 and have continued to perform together intermittently. Wilde has resumed a solo career and written songs with bands such as Plain White T's and Gin Blossoms, but in 2017 The Rembrandts were back on the road touring with Gin Blossoms and working on a new album, 'Via Satellite'.