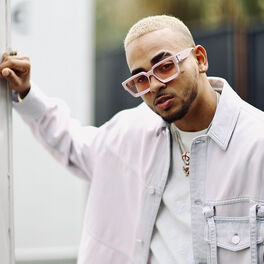 Bringing together the sounds of reggaeton, dancehall, R&B and bachata, Puerto Rican Ozuna announced himself as a new Latin urban-pop superstar with debut album 'Odisea' in 2017 and was soon crossing over into English-language markets thanks to collaborations with Cardi B, Jennifer Lopez and Akon.

Growing up in a poor family in San Juan, his Dominican father was a backing dancer for rapper Vico C, but he was shot dead when Ozuna was just three-years-old. He spent much of his childhood living with his grandmother, but when his uncle spotted his talent and bought him his first microphone, Ozuna started penning his own songs, downloading beats from the Internet and performing at a small local bar. He moved to New York to seek further opportunities in 2010, but returned home after three years and started out posting songs to YouTube before signing a deal with Golden Family Records and landing his first big break when his track 'Si No Te Quiere' became a big radio favourite in 2014. He later teamed up with his hero Daddy Yankee on the reggaeton hit 'No Quiere Enamorarse' and featured on Wisin's 'Escapate Conmigo', and his sweet, tender pop ballad 'Te Vas' began racking up millions of views and building a large following across Latin America. Single 'El Farsante' and 'Se Preparo' were other massive successes, before the album 'Odisea' featured guest spots from J Balvin, Anuel AA, Nicky Jam and De La Ghetto and went on to top the Latin Billboard Chart for 46 non-consecutive weeks. It was later replaced at number one by his second album 'Aura' in 2018, which also made it to number seven on the mainstream US charts, and his duet 'La Modelo' with Cardi B, his single 'Criminal' with Natti Natasha and his feature on the 'Te Bote' remix all received over one billon streams and helped Ozuna become the most viewed artist on YouTube in 2018. He was also part of DJ Snake's swaggering club hit 'Taki Taki' alongside Selena Gomez and Cardi B, before returning with trippy, cosmic banger 'Baila Baila Baila' and his third album 'Nibiru' in 2019.