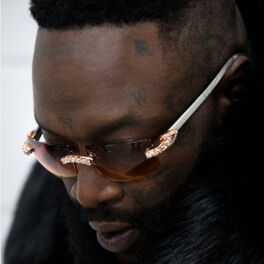 Rather You Than Me

Rather You Than Me

A big bear of a man, dripping in bling, covered in tattoos and sporting his trademark bushy beard, Rick Ross stands as the Don Corleone of Southern rap and one of hip hop's most imposing figures. Raised in Miami, Florida, he attended Albany State University on an American Football scholarship before starting to perform in the mid-1990s and cutting his teeth as a side man for Trick Daddy. Naming himself after the notorious LA drug lord Freeway Rick Ross, his early track Hustlin' sparked a record company bidding war for his services, and after signing to Jay-Z's Def Jam label, his debut album Port of Miami (2006) shot to Number 1 in the US. His deep, growling vocals and strutting gangsta persona helped following albums Trilla (2008), Deeper Than Rap (2009) and God Forgives, I Don't (2012) also top the charts and marked Ross out as a latter day Notorious B.I.G. or Ice Cube; with a tougher, street style sound than most of his contemporaries.