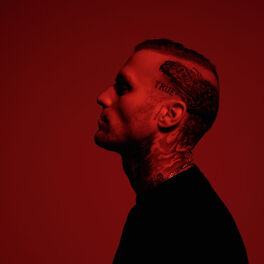 Born in Berlin as Maximillian Diehn, Kontra K was a frequent troublemaker who left school at 16, enjoyed rapping in the same American gangster rap style as his idols and later found a passion for kickboxing.

Starting out in rap duo VollKontakt with Kiezspezial, he was signed to Kaisa's label Hell Raisa and made his name as an aggressive, confrontational voice on his first mixtape 'Fight Club'. He went on to found DePeka Records with fellow rap entrepreneurs Skinny Al and Fatal and established his mix of razor sharp put-downs and industrial dubstep beats on solo EP 'Chrome & Crime' and debut album 'Dobermann' in 2012.

As his style evolved, his tones of aggression and assertion turned to themes of aspiration, survival and pride when he billed himself as a kid from the ghetto shooting for the stars on breakthrough album 'Aus Dem Schatten Ins Licht' in 2015. Follow-up albums 'Labyrinth' (2016), 'Gute Nacht' (2017) and 'Erde Und Knochen' (2018) all went on to top the German charts and Kontra's more positive outlook, rap-rock and dance influences made him a big draw at festivals across Europe. He also went on to found new label Tag1er Records and had his track 'Power' featured prominently in the video game 'Need for Speed'.